Mamelodi Sundowns are winding down after what has been a whirlwind campaign in which new history was made and new heights were reached on and off the pitch. Despite the numerous challenges and setbacks faced throughout the season, The Brazilians were able to strive and persevere through, ending the season in typical fashion, with the team lifting silverware on the final day of the season.

With the previous season containing so much action and so many talking points, we will be breaking up our season review into four parts, diving deep into all the happenings in and around Chloorkop during the 2020/21 season.

The 2019/20 campaign ended with Sundowns being crowned treble winners, securing the Telkom Knockout Cup, The ABSA Premiership and the Nedbank cup in a drama-filled season broken up into two parts due to the Coronavirus pandemic. Coming out of the ‘bio-bubble’ in which the teams had finished the previous campaign, the Premier Soccer League (PSL) confirmed that the upcoming season would be played behind closed doors, which would present a brand new challenge for The Brazilians.

As is the case with every season, the start of a new campaign means the launch of a new kit and sponsors PUMA unveiled a fresh new look design to celebrate the the 50th anniversary of Mamelodi Sundowns. The home and away jerseys were accompanied with a special ‘50 Year Anniversary’ logo that was unveiled earlier in the year celebrating the all the success achieved in the half-century of the club’s history.

The off-season was characterised by Sundowns’ relentless pursuit for excellence. Despite securing the treble in the season before and dominating South African football all the way, the club made a number of key signings to strengthen the squad during the break. Former Highlands Park Duo Mothobi Mvala and Peter Shalulile joined the club shortly before the former Bidvest Wits trio of Haashim Domingo, Ricardo Goss and Gift Motupa joined the Masandawana ranks. Star fullback Aubrey Modiba was next to join the ranks from cross-town rivals SuperSport United as he signed a deal to join the domestic champions. Kermit “Romeo” Erasmus put pen to paper as he joined the Brazilians from Cape Town City to beef up the attack.

Defender Brian Onyango was signed from Maritzburg whilst Jody February and Grant Margeman joined the Yellow Nation from Cape Umoya and Ajax Cape Town respectively. Khuliso Mudau completed the haul of signings as The Brazilians expanded their squad to prepare for the domestic and continental challenge that lay ahead.

As the dust settled on a busy transfer window, the club bid farewell to Coach Pitso Mosimane who departed for Al Ahly and appointed Rulani Mokwena and Manqoba Mngqithi as co-coaches. Shortly after, Steve Komphela joined the technical staff as a senior coach to complete the coaching trio who were aptly named the ‘Three Wise Men’.

The first game of the season was met with much anticipation with the entire nation waiting to see how the new-look Brazilians would fare following the busy off-season. Bloemfontein Celtic were the first opponents of the new season in the MTN8 and were looking for revenge following the defeat in the Nedbank Cup final from the previous season, which happened to be the last game both sides featured in. It was not to be the winning start that Sundowns were hoping for as they suffered defeat in the first game, losing 1-0 to Siwelele and being dumped out of the cup.

Following the less than ideal start to the season Downs quickly dusted themselves off as they looked to begin their league title defence, beginning the quest for PSL title number 11 in the brand new DStv Premiership competition. Knowing a fourth successive title would be record-breaking in South African football history, Masandawana played out the first game of the league campaign away from home against rivals Kaizer Chiefs in a hotly-anticipated affair. It would be the team from Mamelodi who set the tone for what was to come as they walked away as 3-0 victors at the FNB Stadium, sending a strong message to the rest of the league in the process.

The Brazilians quickly found the form that saw them crowned as treble holders, turning on the style and scoring nine goals in the month of November. Up front, newcomers Shalulile and Erasmus were establishing a deadly combination with reigning PSL Footballer of the Year Themba Zwane, whilst Kennedy Mweene, Denis Onyango and the defence worked to keep four clean sheets in the first five league games of the season.

In the four league games that followed  the victory against Amakhosi, Abafana baStyle picked up three wins and a draw as they made a strong start to the domestic league season. A draw against newcomers Tshakhuma FC was quickly followed up by back-to-back victories against Cape Town City and AmaZulu FC as Sundowns began their assault on towards the top of the table. 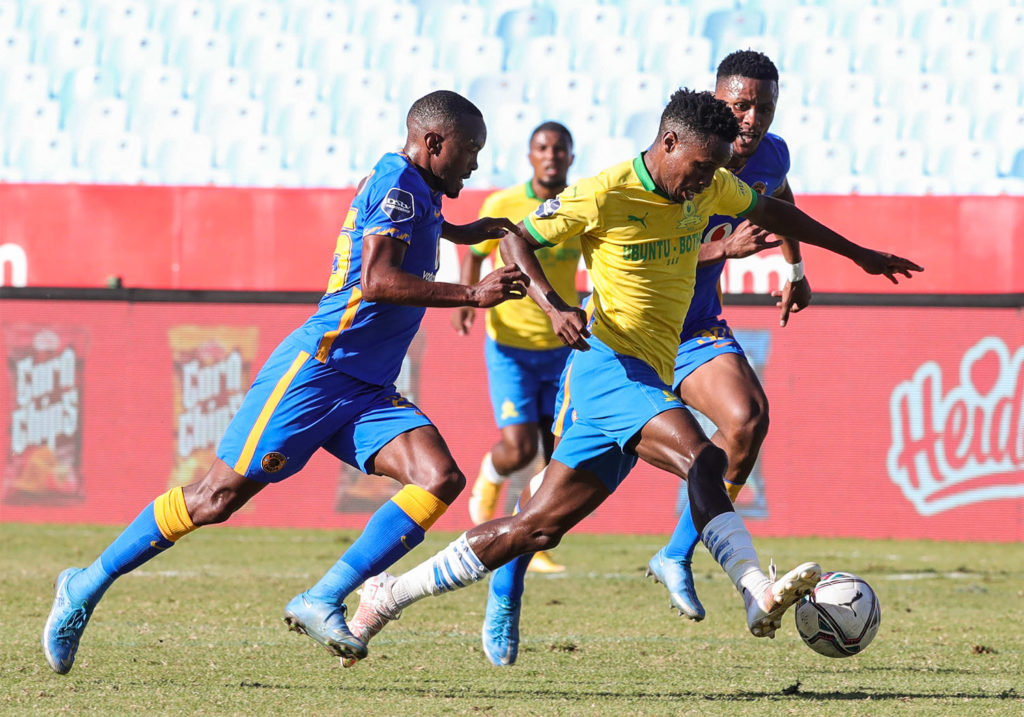 The foundations of the season to come had been laid and Mamelodi Sundowns would continue this fine form as they headed into the final month of the year. With 2020 winding to a close, the next two months would be filled with non-stop action as Masandawana would begin their foray into continental action with the CAF Champions League preliminary stages and league action over the Christmas and New Year period.

Part 2 of our comprehensive season review drops later this week!