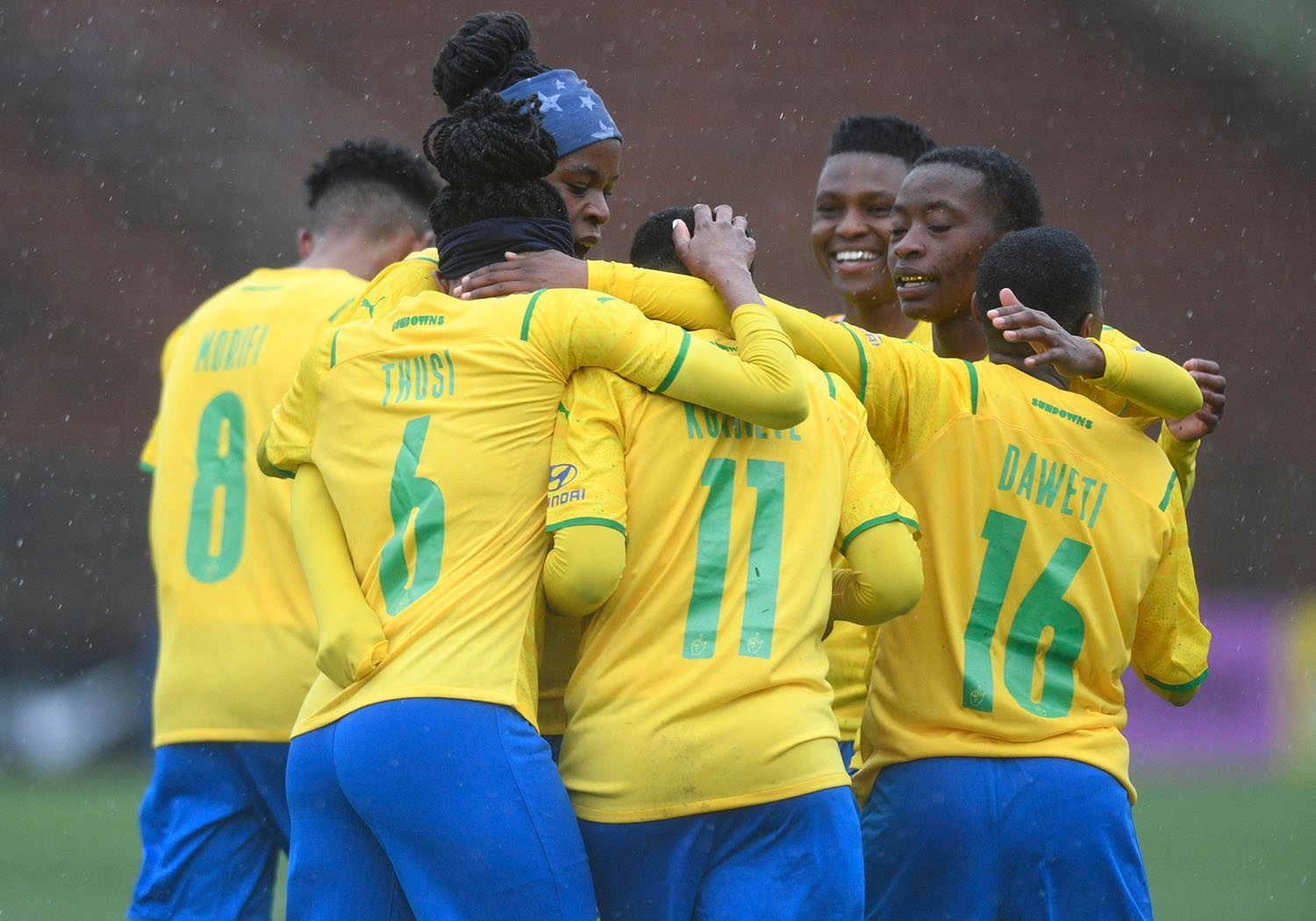 Mamelodi Sundowns Ladies have taken another giant stride towards dominating the African continent thanks to a hard-fought 3-0 win over Zimbabwe’s Black Rhinos Queens in the final of the 2021 TotalEnergies CAF Women’s Champions League – COSAFA Qualifiers. The win meant the Brazilians not only claimed bragging rights in the region and a trophy but also grabbed the golden ticket to represent the Southern region at the inaugural tournament in Egypt later this year.

Playing in front of a delegation from FIFA, Confederation of African Football (CAF) and club President, Dr Patrice Motsepe, as well as the club Chairman, Mr. Tlhopie Motsepe, Masandawana were looking to clinch the golden ticket to Cairo and that they did.

The highly anticipated final pitted two teams with different but effective philosophies at the King Zwelithini Stadium in Durban. Dubbed ‘attack versus defence’, the winner-takes-all clash sparked into life from the blast of the whistle as Sundowns almost grabbed the lead in the first minute but Andisiwe Mgcoyi’s effort failed to hit the target. The home side eventually got the breakthrough in the twelfth minute as Lerato Kgasago finished off a fine team goal which came from some impressive pressing as the Rhinos’ defence was breached for the first time in the competition.

A few minutes later, the Brazilians almost grabbed another goal after Oratile Mokwena showed good vision by delivering a lovely weighted pass for Lelona Daweti who was denied by the Rhinos goalie. For a majority of the first half, Mamelodi Sundowns Ladies dominated possession but struggled to add to their tally.

Banyana Ba Style continued to apply the pressure in the second half as Melinda Kgadiete came close to bagging her sixth goal of the tournament, but her effort flew just narrowly over the bar. A few minutes later, Mgcoyi was left unmarked in the penalty box but managed to scoop her effort over the post as Sundowns continued to knock on Rhino’s door. Just before the hour mark, Banyana Ba Style made their first substitution with Thalea Smidt replacing the industrious Daweti. The Queens followed suit by making a raft of changes as both sides unleashed fresher legs onto the battlefield.

With time running out, the highly energetic Brazilians continued to press their opponents and were duly rewarded thanks to Nonhlanhla Mthandi who benefitted from a goalkeeping error. Banyana Ba Style sealed the deal late on as substitutes Bongiwe Thusi and Boitumelo Rabale linked up nicely with the latter scoring a cracking goal to wrap up a thrilling final.

The impressive 3-0 victory meant the Sundowns Ladies have qualified for the first-ever CAF Champions League tournament, where they will represent Southern Africa, a competition which excites Player of the Match, Andisiwe Mgcoyi.

“My mind was already in Cairo. We told ourselves that once we got a goal or two, we would do everything in our power to defend that goal. I must say I am very pleased with our substitutes as they changed the complexion of the game. It was not an easy battle, but I am glad we survived the threats of our opponents”. said Mgcoyi.

In the end, the disappointed Rhinos did not leave the stadium empty-handed as Precious Mudyiwa and Rutendo Makore claimed the goalkeeper and player of the tournament respectively. With five goals to her name, Banyana Banyana-bound Melinda Kgadiete clinched the Golden Boot award to wrap up a perfect afternoon for Mamelodi Sundowns.

Overall, Banyana Ba Style scored an incredible 22 goals across five games in the competition and conceded just once which further underscored their status as worthy winners of the competition. As the team gears up for Cairo later this year, Mamelodi Sundowns Ladies will be looking to extend their domestic dominance into the continental domain as they go head-to-head against some of the finest teams on the continent.